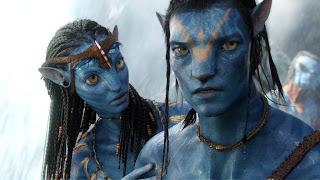 Ever since Avatar released to theatres,  it has been meet with great success. Now holding the number 2 spot on the all time Worldwide revenue list.  Avatar has really been a great experience for the majority of us.  Unfortunately, not everyone has shared in our same experience.

Avatar has been met with a lot of controversy since its release, as Avatar has been accused of everything from being Un-American, to being critical of US troops, to encouraging goddess worship.  But now, Avatar can add racism to the list of many accusations against it. The Toronto Star on Monday, published an article  which looked at some appearent bloggers accusations that the basic story of Avatar is racist.  The fact that a "White Man"  is the one that ultimately saves the Na'vi is apparently a cause for the film being racist.

Avatar's detractors apparently feel that because the Na'vi were unable to save themselves with out this "White Soldier"  this is innately racist.  I really have to say that I disagree with this.  I'm Black and I had absoluterly no problem watching Avatar, nor do I have a problem watching it again.  Its really crazy that people are getting so worked up about their own interpretations of the film that they seem to miss the story completely.  If Jack Sully (Sam Washington) was black would we have an issue here?

I'm just glad that James Cameron has a bit more class when it comes to the criticism that he faces.   He released a statement in which he stated that his film, "asks us to open our eyes and truly see others, respecting them even though they are different, in the hope that we may find a way to prevent conflict and live more harmoniously on this world. I hardly think that is a racist message."

Mind you , I would have to think that every time someone criticizes Avatar, James Camerson must put a smile on his face.  At lest I would.

We all know how the church's criticism of the Da Vinci Code sold the book and the movie.  In fact, many people hadn't even heard about The Da Vinci Code until the church began its criticizm of the book.  With Avatar nipping at the heals of Titanic,  any controversy will be a good thing for this film.  James Cameron was probably wondering what it would take to beat Titanic, but now he's getting some well needed controversy to help propel Avatar forward, as there are people out there that will go to see Avatar due to the controversy.

I'm just waiting for someone to come out and say that Avatar kills Babies.  Then again,  someone just make it up.  We'll all write about it.  And Avatar will hopefully beat Titanic by the time the controversy has calmed down.  So what do you say?
Posted by Chris Everything at 12:07 AM