Brett Comes Back to the WWE 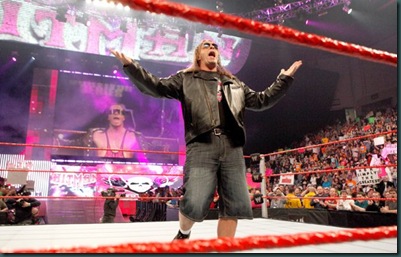 For those that missed it, Brett “The Hitman” Hart returned to the WWE, following a over 12 year absence.  And, it was amazing.  (Well at lest for me.)

Growing up in the 80s, wrestling was just one of those shows that everyone watched.  Back then, people use to believe that wrestling was actually real and so we rooted for the good guys, because we believed the bad guy was really bad and the good guy was really good.  Brett Hart was one of the good guys back then. Certainly there were at the time much more popular wrestlers in Hulk Hogan and Andre The Giant.  But Brett found a way to set himself apart being a part of a tag team called the Hart Foundation

Later, as Andre the Giant died and some of the other wrestlers began to move on Brett “The Hitman” Hart began to be set up to take over by Vince McMahon, the owner of then WWF (now WWE).  Very quickly, Brett began to rise to the top, winning the Intercontinental Championship back in 1991 from Mr. Perfect and continued until he became the WWE Champion in 1992.

But that all changed in 1997.  Facing some financial problems Vince McMahon advised Brett to consider talking to WCW (WWE’s chief competitor at the time), about possibly signing with them.  Brett and Vince up to that point had had a almost father-son relationship, and so, Brett followed Vince’s advise and signed with WCW.  The only problem with Brett signing with WCW was that he was currently the WWE Champion and thus would have to lose it before moving on to WCW.  Brett wanted to lose it at a match outside of Canada (where Brett comes from), but Vince wanted him to lose it at Survivor Series in Montreal.

Unknown to Brett, Vince decided to get what he wanted.  Vince had the ring bell rung as Shawn Michaels put Brett in a Sharp Shooter.  Thus having Brett lose the Championship in Canada where he didn’t wish to lose it.

Brett did not take this result very well (understandably so),  Brett responded by spitting in Vince’s face and later punching him out in the backstage area.  Anyone that watched “Wresting with Shadows” knows what affect all of this had on Brett, and how it worked to start a feud between Vince and Brett over the years.  Which continued following the death of Brett’s Brother Owen Hart during a Pay-Per-View event for the WWE called “Over The Edge” on May 23, 1999.

Last night, I decided to go out and watch WWE Raw with some friends.  Even though the show over all was ok, it was just great to see Brett back, and to see him make up with Shawn Michaels, as well as, to continue his feud with Vince McMahon.  All in all it was a great night.

So what are your thoughts on Brett coming back to the WWE?  Do you care?

Posted by Chris Everything at 12:59 PM