Van Damme Goes back to the Ring I’m not sure if this is a reflection of how well Jean Claude Van Damme’s career has been going over the past 15 years.  But Film Junk is reporting that Van Damme will be returning to the Kickboxing area.

Now, Jean Claude Van Damme might be a name that your not to familiar with, especially if you didn’t grow up during the late 80s,earlier 90s.  Jean Claude Van Damme, was a huge martial arts film star during the late 80s and 90s that kind of fizzled  out over the last 15 years.  Van Damme has had some blips of hope in his career over the years, but nothing that has worked to bring him back into the spotlight again.

But returning to the ring?  Its kind of a odd move on his part.  Perhaps Van Damme looked at Sylvester Stallone’s Rocky Balboa at age 60 and thought that perhaps he could gain recognition as a martial arts again if he went into the ring at 50.  I can’t really imagine Van Damme coming out of the ring victorious against a much younger opponent in Somluck Kamsing. But it will be interesting to watch.

So, the whole thing is probably just a big publicity stunt, but it will be interesting to see just what Van Damme can still do at 50.  The only question is, will you be watching?

Are you a fan of Van Damme?  Do you care at this point? 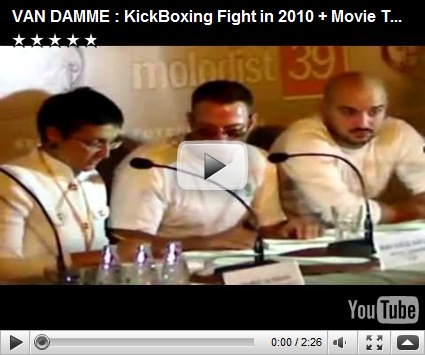 ***Update:  I just found this clip over on the Huffington Post.