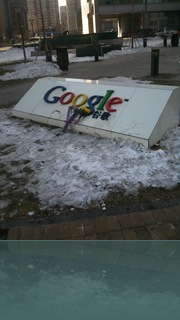 Well its probably only a matter of time.

A Few days ago, Google made the unprecedented decision to go public with news of attacks that their offices in China have been experiencing.

According to Google’s Official Blog, the attacks that Google has been experiencing, center around the Gmail accounts of activists for human rights in China.  Google also, found that many of the other business in China had experienced similar attacks.

It was with this information that Google has made the decision to try and stand up to the Chinese Government and stop filtering their search results, which was required by the Chinese government.  I really think that this is a courageous move on the part of Google.  Google stands to lose hundreds of millions of dollars if they are forced to leave China, and so their really isn’t a benefit for them to fight the Chinese Government.    Other than to live up to their motto of “Don’t be Evil”.

In any case, well I’ll learn soon what will happen to Google.  Personally, I think they will be leaving China shortly as I can’t see the Chinese Government allowing Google not to censor their search results.

Posted by Chris Everything at 11:46 AM