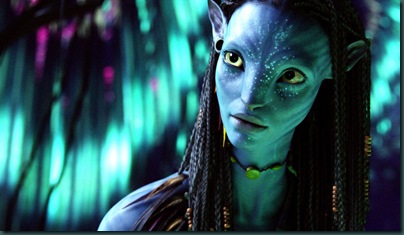 Late last week it came out, during an interview with Zoe Saldana, that James Cameron did in fact film a sex scene between the characters of Jake Sully and Neytiri, which was cut from the film before its release.  According to Zoe, there is a possibility that this sex scene could show up on a DVD release sometime in the future.  Now this news has made its way around the internet being reported on a number of sites, but I have to ask '”Who really cares?”

Avatar is a wonderful movie that is never slow and has amazing visuals.  At 3 hours long, Avatar is already a pretty full movie and so anything that would be added to it needs to add to the story or visuals in some way, in order to be a meaningful addition to the movie.  I just can’t see how the sex scene between Neytiri and Jake Sully could really add anything to Avatar. We all got the idea of what happened between Jack and Neytiri, and so we really don’t need to see it.

Sometimes, film makers need to let the audience imagine and form their own ideas.  If they add the sex scene it won’t hurt Avatar, it’ll just be a bit unnecessary.