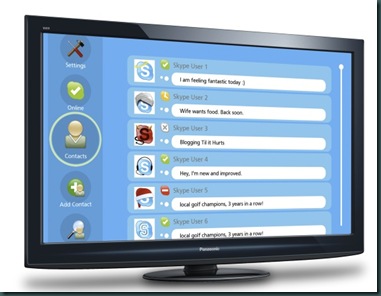 CES is now on in Las Vegas, and as a result we are getting a lot of interesting announcements coming out of this convention.  But non so far has peaked my interest like Skype HD has.

Engadget reported yesterday that Skype now has a deal with LG and Panasonic to have Skype built in to their Internet enabled Plasma and LCD TV sets.  These TV sets will also come with an HD Webcam, capable of being used for video calling.

This is really a good idea for those that would love to do a video call without having to leave your living room.  I remember back in (I believe) the 90s, they introduced video phones and they just faded away.   But with Skype and Webcams coming built into TV sets, I think we can safely say that video calling will experience a renaissance phase, especially as people make the jump to HD.

Also, this is great decision on the part of Skype since all Skype phones out there are selling for over $100, which is a hard sell for many people who have no problems just using their computer with a headset.  Having Skype come built into your TV, will certainly help to drive subscription for Skype, which up to this point has had a hard time catching on.

Personally, I can’t wait to see these TV sets show up on Store shelves.  I haven’t bought an HDTV as yet,  so maybe one of these will be my first one.