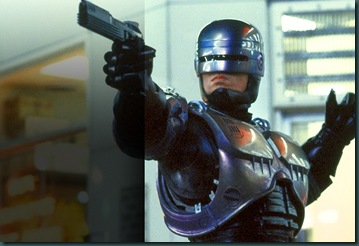 The Latino Review is reporting that Robocop has officially been put on hold. And with good reason.

Apparently, Mary Parent, the Chairperson from MGM, wants to see a CGI 3D Robocop film, while Darren Aronofsky isn’t really interested in in 3D, as he views it as kind of gimmicky.  And you know what?  I don’t really blame Darren for feeling that way.  Up until Avatar, every movie that was released in 3D, with very few exceptions, was really gimmicky.  And yes, I’m pointing the finger at you My Bloody Valentine.

As for whether or not a 3D Robocop could be actually good.  I really just don’t think so.  Unlike Avatar, Robocop takes place in a very dismal future Detroit, which lacks all of the eye candy that Avatar had.  Also, I don’t see Robocop really benefitting from 3D.  Could it be done in 3D?  Certainly, I’m just not sure that its really necessary here.

Finally, if the guy creating this film isn’t motivated in the lest to go 3D, I think that it could get very gimmicky very fast.  James Cameron had a vision for 3D and that vision is what he applied to Avatar.  This is why Avatar was so good in 3D.  I still haven’t seen it yet without the 3D, but I can bet that its a different experience, as this film had 3D as the focus from the start of the production of this movie,  unlike Robocop.   So to impose 3D on Robocop now isn’t really going to do anything for the audience.

So, what are your thoughts?  Are you aching for a 3D Robocop?

Posted by Chris Everything at 2:22 PM