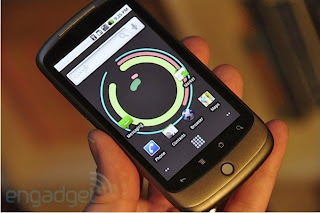 As many of you know, Googles new Android phone called Nexus One released last week Tuesday, to much buzz and talk online.  But even with all the momentum that the Nexus One had leading up to its release,  the Nexus One has failed to really sell.

Mobile Beat is reporting that the Nexus One has only managed to sell 20,000 phones.  In comparison, Apples iPhone 3GS sold over a million phones in just 3 days, and even Motorola's Droid sold 250,000 in its first week.  This is actually kind of disappointing news for the Nexus One.  The assumption was that this phone would sell like hot cakes, but here it is having difficulty getting off the ground. Maybe its because its not an iPhone.

Working at a new mobile carrier up here in Canada, I know that for many people the iPhone is considered to be the ultimate phone.  When I did my short stint in a retail store during the holidays, I found that the number one question people had was "Do you have the iPhone?"  The iPhone has managed to cement itself as the best phone out there in the minds of the average individual.  And they want nothing else.

Google really did have an uphill battle with this phone. It just unfortunate that Google never really tried to fight.  For the most part Google hasn't marketed the Nexus One.  At lest not to the extent that Apple or Motorola marketed their phones.  When I run into people and talk about the Nexus One, I find myself explaining to them just what the phone is.  The majority of non geeks haven't heard about the Nexus One, unlike the Droid or the iPhone.

Finally, Google's decision to sell the phone online is problematic for most people and decreases their overall visibility with the Nexus One.  Working in retail I know the importance of letting the customer play with the phone.  People want to know how the phone feels in their hand and how it functions before committing to the phone.  Its only us geeks that get excited over how a phone is supposed to function and its specs.  Only geeks are going to go out and find what the latest phones are and when they are coming out.  And so in the end, it was only the geeks that seemed to have bought the Nexus One.

I hope that the slow sales that Google is experiencing will encourage Google to change their strategy with the Nexus One.  Maybe they'll let it ship to Canada.  One can only hope.
Posted by Chris Everything at 10:47 AM