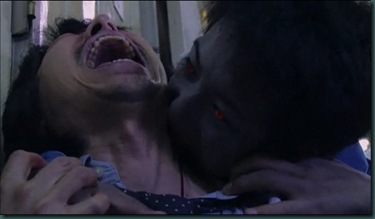 Well a Japanese film that is.

IGN is reporting that a Dead Rising film was officially announced by Capcom in Tokyo, Japan Monday.  This Dead Rising film will be directed by Dead Rising producer Keiji Inafune and will follow the exploits of two brothers that find themselves in a quarantined zombie town.

Looking from the trailer (which you can see here),  this is very clearly a b-movie which has all of the gore and bad acting that normally accompanies these types of films.  Which leads me to ask, why Capcom would want to produce a film like this.  Are b-movies more popular with the Japanese audience?  Or is this simply Capcom cutting their teeth on a film?

In any case,  the Dead Rising film will be released later this year online for those curious enough to see it.

Posted by Chris Everything at 12:16 PM