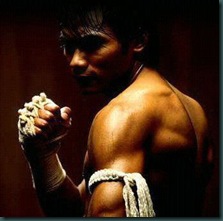 Now many of you are probably scratching your heads wondering just who Tony Jaa actually is. Well I’ll tell you. Tony Jaa was the main actor for the Ong Bak martial arts films. At one point Tony Jaa was probably the most exciting new martial arts actor in the world, as he came in from nowhere and was doing a lot of crazy stunts in his first Ong Bak film.

Unfortunately, Ong Bak did not continue the way it started. Both Ong Bak 2 and now 3 did not do very well. Ong Bak 2 was a direct to DVD release and it appears that Ong Bak 3 will be going the same route.

So with to flops under his belt, Tony Jaa has decided to call it quits from acting and is reportedly joining a Monastery to become a Monk. According to reports, in Thailand it’s not uncommon for someone to leave their careers and become a monk for a time. So let’s just hope that Tony decideds to come back to acting shortly.

Posted by Chris Everything at 9:22 AM