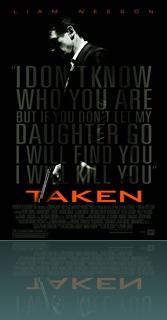 Now this is good news.

Personally, I think that 2008’s Taken was a much underrated movie. Taken was an amazing film that really surprised me, as going in to it, I never thought that it would be as good as it was. But now, there is word from none other than Liam Neeson that he is speaking with producer Luc Besson about the possibility of a Taken 2. This is good news, but I have to wonder how they will accomplish this.

Anyone that watched Taken knows the story revolves around Brian Mills' daughter getting kidnapped and Brian (Leam Neeson) going to save her. What I’m wonder is just what Taken 2 would be about. It would be a bit cheesy if Brian’s daughter got kidnapped again, so there would have to be another motivation for Brian to get involved.

Whatever the case, I’m glad they are considering a sequel. What about you? Did you like Taken? Are you looking forward to a sequel?