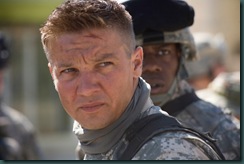 Well at least that’s according to The Hollywood Reporter.

For months now, it has been rumoured that Jeremy Renner would be taking on the role of everyone’s favourite archer, Hawkeye. But there are now reports that Jeremy is in final negotiations with Marvel to play Hawkeye. However, whether or not Renner will actually play Hawkeye is still a bit up in the air, since Marvel still hasn’t confirmed that they are in talks with Renner.

But if it is true, I think Renner would be a good choice. Anyone that has seen The Hurt Locker knows just how well Renner did in that film. Truthfully I would have preferred to see him take on Captain America, but Hawkeye isn’t a bad role either.

So what do you think? Is Renner right for The Avengers?

Posted by Chris Everything at 10:57 AM