All Eyes on Steve 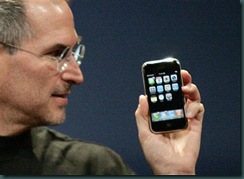 For those that don’t know, WWDC starts tomorrow (Monday) where it is widely expected that Steve Jobs will officially unveil the next generation iPhone. Previously, images and videos the fabled phone was leaked online via Gizmodo, but tomorrow we should see it become official.

What else will be presented during the keynote is a big question. Steve Jobs just over a week ago sent out and e-mail stating that we won’t be disappointed in what we see at his keynote, so you have to wonder if Steve Jobs has another product under his sleeve. Also, in his e-mail he stated that there is no way that Google’s Android will be able to beat the iPhone? What new feature could the iPhone have to maintain dominates in the mobile world?

I guess we’ll just have to wait and see.

Posted by Chris Everything at 10:31 PM