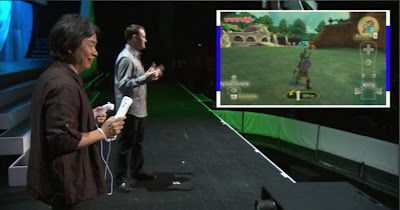 Tat is that big question.

Yesterday as you well know, both Nintendo and Sony had their press conferences which included a slew of new games and some hardware in the case of Nintendo's 3DS. Personally, I'm quite happy with what Nintendo announce, but was it enough?

Nintendo was in an interesting spot this year, having had the lead in the console wars over the last several years, Nintendo is now faced with the threat of being supplanted by its competitors new motion control solutions. So the question was, does Nintendo have what it takes to combat both Microsoft and Sony to maintain their lead? And what new technology my they announce to help them with that goal? Truthfully, I was prepared to make a bold statement that Nintendo would be announcing a new console, like a Wii HD. But that didn't quite happen.

What did happen was what Nintendo should have done 2 E3's ago. Nintendo showed off games that the people that go to E3 actually care about. Over the last couple of E3's Nintendo has concentrated to its detriment on the casual gamer and thus everyone at the convention went away from Nintendo's press conferences feeling like they were robbed. This year however, Nintendo came ready to play ball, announcing everything from a new Zelda, to a new Goldeneye remake and all of it with playable demos. But were these announcements enough?

Sony followed Nintendo's press conference with an impressive line up of games and demos. Sony even introduced their new Playstation Plus service which would give gamers access to free games and content. Personally I'm glad that Playstation owners have something comparable to Xbox Live. I don't have a PS3, but I watched my friend play Modern Warfare 2 and his games are always lagging out or dropping. Hopefully this new service will give PS3 owners some stability.

The one big surprise of the Sony Press conference was that they managed to get Gabe Newell, the CEO of Valve, to come out and announce Portals 2 as an exclusive of the PS3, as well as, the addition of Steam to PS3s. Now for those that don't know, Gabe Newell back in October of 2007 called the PS3 "a waste of everyone’s time" in an interview with Next-Gen, so to get him to change his mind was quite a large feat.

In any case, I’ll get back to the question. Who won E3? The truth is I'm kind of leaning towards Microsoft a little. Why? Personally I'm excited to see what directions developers will take Kinetic in. Sure Microsoft made a mess of their presentation with all of the Wii rip off games, but I really feel Kinetics has some promise. Nintendo for me was seconded since they gave everyone finally what they wanted and that was good games to look forward to and new hardware in the 3DS. Everyone that has seen the 3DS has been impressed by it and so I know it’s going somewhere. As for Sony, I’m kind of indifferent. I don't own a PS3 or a PSP and I haven't really seen anything that would pull me over towards Sony in their presentation. Certainly that means I'm biased, but in truth I'm probably in a good position to really judge Sony since these press conferences are designed to inform you of upcoming products and to try and sell you on them. I'm not sold yet.

I know that some will disagree with me. As I've taken a look at IGN's poll asking this question, Nintendo is in the lead, followed by Sony and Microsoft is far behind. And I can understand where people are coming from since Microsoft essentially copied Nintendo’s presentation from 2 years ago, as it came to Kinetic, but Kinetic does represent new gaming possibilities beyond those of Nintendo or Sony and that is what I'm looking forward to.

In any case, what do you think? Who do you think Won E3?
Posted by Chris Everything at 7:02 PM