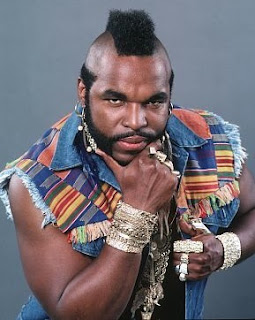 Well the new movie that is.

Over the last several months I've never keep it secret that I'm not a huge fan of the new film adaptation of the A-Team.  But what I never expected is that one of the original A-Team members would be a critic of the film.

MSN Movies is reporting that Mr. T feels that the new A-Team film is too graphic.  According to Mr. T, he found that the new A-Team film was too violent and had too much sex.  Now many sites have used his quote to take pot shots at Mr. T, but I feel more inclined to respect him for his honesty.   If someone finds a film to be too violent or sexual for their tastes, I think people should respect it.   Mr. T wasn't overly critical in what he said about the movie, nor did he ask for it to be band so I'm not quite sure where this criticism is really coming from.  So I've decided to quote what Mr. T said here,

"People die in the film and there's plenty of sex but when we did it, no one got hurt and it was all played for fun and family entertainment. These seem to be elements nobody is interested in anymore.

"It was too graphic for me. I've no doubt it will do big business at the box office but it's nothing like the show we turned out every week."

Is Mr.T really being overly critical or are people just picking on Mr. T.  I have to think that people are just over reacting to what Mr. T said.  And anyone that has a problem with what he said needs to take a good hard look at themselves, what do you think?
Posted by Chris Everything at 11:36 PM