Is the 3DS a Revolution? 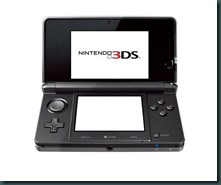 Nintendo seems to think so.

Many of you may remember that a number of years ago, Nintendo placed a stack in 3D portable gaming with the release of their Virtual boy console back in 1995. Now for those that can remember, the Virtual Boy never really sold well and was very quickly abandoned by Nintendo in 1996. Some of the complaints that people had about the console was that it would cause headaches, and that it was an ugly console which was reaffirmed in 2007 when PC World listed it at number five on their “Ugliest products in History List”. Could the new 3DS suffer the same fate as the Virtual Boy?

I have to think that the 3DS will do very well when it releases. In many ways I’m disappointed that Nintendo has announced a new portable console so quickly after releasing a new iteration of their DS hand held in the DSi XL. But other than that, I think that console will have a strong adoption rate by consumers, especially if the console lives up to the hype. From many of the hands on reports that I’ve read, many of the reporters are impressed by just how the images on the console look. It is really impressive to see that Nintendo is at the cutting edge of the portable gaming space.

What I find most interesting with the 3DS is that it will support video playback and has a strong connectivity emphasis. Before the 3DS, Nintendo has pretty much overlooked online play and video playback on any of their consoles. But now it seems that the light has finally gone on for Nintendo, which makes me interested in seeing how these two features may be integrated into the Wii or perhaps a new console.

Clearly, Nintendo must be feeling a little heat not just from Sony and Microsoft, but also Apple. Ever since Apple opened their app store more and more games have been making their way over to the Apple iPhone and iPod Touch. But now with the new iPhone on the way and the iPad, Apple will increasingly have a foot in the gaming world. The 3DS may be a move by Nintendo to try and maintain their lead in the portable gaming world. Whether the 3DS will be enough to ward off its competitors, only time will tell.

As for whether or not the 3DS is the revolution that Nintendo wants it to be, it’s still a bit uncertain at this time. Certainly Nintendo has managed to Wow a number of journalist by the new console, but will the general public be as enthusiastic. I have a strong feeling that people will be impressed, but that too will have to wait. Unfortunately, it doesn’t appear that Nintendo announced just when this new console might be releasing, but you can be certain that I’ll be keeping my eye out for this one.

What about you? Are you going to buy a 3DS?

Posted by Chris Everything at 11:03 PM