Robin Williams wants in on Batman 3 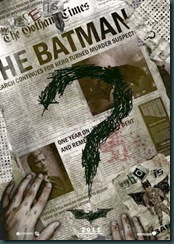 I kind of hope he gets in.

I’m not going to hide it, but I’m a huge fan of Robin Williams’ work. Ever since I was a kid I’ve been watching Robin Williams' films and I still do. I think Robin is probably still one of the funniest, if not the funniest actor to be working in Hollywood. Robin Williams has also, on occasion, shown all of us that he is an amazing actor, any one that saw films like One Hour Photo can attest to how great of an actor Robin Williams is.

So when news came out that Robin Williams wants to play the Riddler in the next Batman film, it was quite exciting for me. Robin was previously offered the role of the Joker and Riddler in the past series of Batman films, but was ultimately passed up in favour of Jack Nicholson and Jim Carrey.

Whether or not the Riddler will be in the next Batman film, is a little up in the air as the script is still being written. But hopefully Christopher Nolan will see fit to put him in, since I think most fans want to see the Riddler in Batman. Maybe Robin will be lucky enough to land the coveted role, after all he has been turned down twice already.

So what do you think? Is Robin good for Batman?

Posted by Chris Everything at 11:04 PM