Second Time Around and Still Non the Wiser

***Warning this post contains spoilers. Read ahead at your own risk. 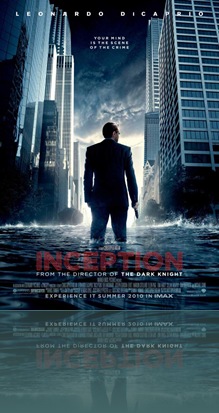 I guess I’ll need to see it a third time.

Unless you missed it, you probably know that Inception released this past Friday and its worked to create a lot of discussion online. It seems like all the film sites and social news sites are obsessed with trying to figuring out Inception and its many mysteries. Inception has been described as Christopher Nolan’s best work thus far which is quite high praise given that Chris has the Dark Knight under his belt, a film that was much loved by fans and reviewers alike.

So does Inception live up to the hype? I think so. Not only is Inception a great film, it’s a film that has really caused a lot of thought, as Chris has presented us with quite the paradox in Inception. There are a lot of unanswered questions with this film and they were quite intentional. On the surface Inception starts out with a simple idea, what if people could enter your dreams and steal your ideas? But then the film quickly moves to turn this concept on its head. What if someone instead of stealing your ideas, could instead place an idea in your mind? The film follows Cobb who is the best extractor in the world (someone that can enter people’s dreams and steal their ideas), as he and his team attempt to plant an idea into Robert Fischer Jr. to dissolve his inherited energy empire.

Inception brings us very deep into the mind of Cobb, who we find is a tormented soul following the death of his wife, who was a fellow dreamer. Cobb’s wife Mal crops up from time to time throughout the film as Cobb struggles to control his subconscious memory of her. It’s made very clear to us the audience that Mal represents Cobb’s guilt, which leads her to pop up just to sabotage his plans. Mal pops up so much in fact that Cobb has decided sometime before the start of the film, not to be involved in the creation of the environments of the dreams as to prevent Mal from knowing the dream.

All in all, Inception is a very masterfully made film that has brought up a lot of questions. Questions that I hoped I could be cleared up with a second viewing. Questions like is Mal real? Does Cobb really have kids? Is the whole film a dream? To be completely honest, I still struggle with these questions and others, so I thought that I would just give my thoughts on these ideas and others.

Is Mal real? I think she may simply be a figment of Cobb’s imagination. Why? The film never really gives us any real evidence of her existents other than Cobb’s memories. Now you might point out here that Arthur says he meet her before she died and that she was a very lovely women, I’ll get to that. During the film we find out that Cobb spent a lot of time in Limbo an area that is completely empty other than constructed objects by the dreamer. It is my thinking that Cobb in his loneliness created her. As for if Cobb has kids, I think you probably can guess my answer. I don’t think they are real. If Mal isn’t real then Cobb couldn’t certainly have kids. Also, in the end when we finally get to see the Cobb’s kid’s faces and they haven’t aged nor have they changed clothes. We only see Cobb’s kids in his dream state and at the end were we are left with the question of whether or not if Cobb is still dreaming? I personally think he is still dreaming. Why? We need to remember what the totem was designed to do, tell you if you are in someone else's dream as only you know nuances of your totem, but what the film doesn’t seem to specify and with good reason as for whether a Totem could be useful for telling if you are still dreaming. If you know what the nuances of your totem, can’t you simply recreate it in your own dream, I think so. That is why Mal’s Totem kept spinning when it was used in Limbo. Also, we never actually see the Totem fall. As Cobb draws away from the Totem it seems as if it my fall, but then we don’t actually see it fall. Perhaps it would have fallen if Cobb remained by it, but as he moved away it just kept spinning. In truth, we will never know the answer as Chris decided to cut away as it appears it may fall.

Is Inception all a dream? I kind of think so. Why? In Inception we are introduced to the idea that dreams aren’t necessarily very detailed, but they feel real. And that is the impression that I was left with when viewing the story. One thing that you might notice is that every character in this film seems to go by only one name. Just check out imdb. The only characters that has more than one name is Robert Fischer Jr. and Maurice Fischer. Every other character has one name and each character seems to have a particular meaning as it comes to the subconscious. As Roger Ebert pointed out Adriadne (Ellen Page) is the name of the women in Greek mythology that helped Theseus escape from the Minotaur’s labryinth. Could Adriadne simply be a product of Cobb’s mind to help lead him out of the dream? Earlier in the film, it was established that Adriadne as an Architect (the person responsible for building the dreams) is to build a labyrinth, to prevent the subjects subconscious from finding them.

Then again, perhaps I’m just talking out of my butt. Whatever the case Inception is a complex film that really is worth a few viewings to try and put together your thoughts. So what are your thoughts? Are you as confused as I am?

Posted by Chris Everything at 10:01 PM