Clash of the Titans 2? 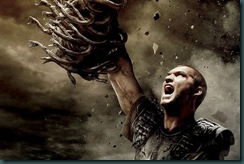 I’ll admit that I actually kind of liked Clash of the Titans. I know a lot of reviews hated it and even some of my friends, but I didn’t mind it. Sure it wasn’t the greatest film ever, but it did the job for me. But now there is talk of a sequel to Clash of the Titans and I have to wonder why.

Sure the film was very successful at the box office, but the story ended. There was no sequel to the story ever written, so I have to wonder where the story would go. Spoiler: Hades was defeated, the Krakken was killed, the relationship between man and Gods seemed to have improved slightly from the ending. Where can they go with this character? Sure it makes good economic sense to make a sequel, but I’m not convinced that there is a good story reason to do so.

I’m glad to hear that they plan on trying to change Sam’s character up a bit so that he can play someone slightly different, but I still don’t see a point in a sequel other than to make money.

What are your thoughts?  Do you want to see Clash of the Titans 2?

Posted by Chris Everything at 11:49 AM

Email ThisBlogThis!Share to TwitterShare to FacebookShare to Pinterest
Labels: Clash of the Titans, Film, Movie, Movies, The Movie Blog