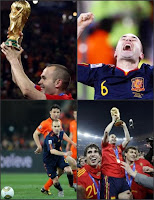 In case you missed it, Spain won the World Cup.

Spain played a pretty close game with the Netherlands this afternoon (which I unfortunately missed most of it due to work), which ended in a overtime victory for Spain. Personally I was hoping that the Netherlands would take it, but Spain pulled it off so I got to give it to them.

And just in case you’re wondering, I’m never going to doubt the predictive capabilities of an Octopus again. Congratz Spain.
Posted by Chris Everything at 12:55 AM