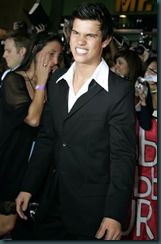 Look at that fearsome grin.

I know that many of you probably heard of Taylor Lautner and Twilight, the incredibly popular film series based on the book series by the same name. As you know, Taylor has been making some pretty big waves in Hollywood these days playing a werewolf who seemingly doesn’t like to wear a shirt.

Certainly Taylor isn’t exactly your Hollywood tough guy, but could he play one, even if it was just for a cameo. Would Taylor be the slightest bit convincing as a Tough guy? Probably not, but this still hasn’t stopped none other than Bryan Singer to suggest that Taylor Lautner could possibly play Wolverine in a cameo for X-Men First Class.

Now some of you are probably laughing right now, but apparently this suggestion was no joke. In an interview with Joblo.com Bryan Singer confirmed his suggestion, which leads me to the obvious question, “Bryan Singer are you crazy?” Bryan Singer is the same director that brought us great films like Unusual Suspects, X-men 1 and 2. But it appears that after Superman Returns he has kind of lost it. I just hope he gets it back sometime soon.

Posted by Chris Everything at 11:15 AM