Is Thanos in Thor? 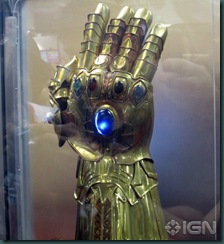 It would be great if he was.

This past weekend, The San Diego Comic-Con took place in San Diego which brought with it a lot of movie news. The most intriguing of which, (well most intriguing to me) is whether or not Thanos will be in the Thor movies. Marvel over the weekend revealed that Odin, Thor’s father, has the Infinity Gauntlet as part of his collection.

The Infinity Gauntlet may not ring a bell for many people reading this so I’ll give you a bit of a rundown of this item. The Infinite Gauntlet appeared in the Marvel Miniseries by the same name back in 1991, and was created by Thanos, who during the Thanos Quest miniseries, gathered the Infinite Gems (powerful items) together and put them in a Gauntlet. In the Infinity Gauntlet, Thanos sets out to win the love of Death by fulfilling her wish for him to kill half the Universes population. The remaining heroes gather together to take on Thanos and reverse what Thanos has done.

The Infinity Gauntlet to this day is still probably one of my favourite Marvel Storylines and Thanos is probably my favourite hero/villain character. If Thanos is, in Thor I know I’m not missing this movie.

Thano is a really interesting character that who was not only strong, but had a high level of intelligence. In many cases, Thanos was several steps ahead of his opponents, but he had one weakness, he never really wanted to win. So if he hatched a evil scheme for the most part he would end up sabotaging himself slightly which would lead to his defeat. This not wanting to win at evil slowly led him to eventually become a hero rather than to remain a villain.

Personally, I think Thanos would be a great addition to Thor or perhaps the Avengers movie. Whichever the case, I hope he makes it into one of these films since I would love to see him on the big screen.

Posted by Chris Everything at 12:07 PM