Darth Vader is not Welcome at Lucas Films 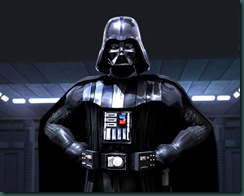 Man this is a bad situation.

Growing up Star Wars was one of those franchises that had a great impact on my childhood and many others. (And you know what it still does.) Every so often I like to fire up the DVD player and pop in one of the Star Wars films. I have a great level of respect for what George Lucas and those behind the film accomplished.

It’s just unfortunate that some clever accounting practises have screwed many of the actors of these films and continues to screw them. Over the years there have been a number of reports from actors, etc. that they do not receive any residuals for any of the films due to the fact that the original films haven’t made any money. (Ya right.) And thus the actors will not receive any residuals. That is what David Prowse commented on in a recent interview with Slash film, which unfortunately appears to have upset Lucas Films so much so that they have now officially banned Dave from all Lucas Events.

That is right. Because David commented on his screwed up situation, he got banned from all Lucas film events. I can’t begin to tell you how wrong this is. But apparently these practises are very common in Hollywood, which is disappointing. I hope David gets some better treatment. And I’m not alone. It appears that some people have decided to create a petition to get David unbanned. So if you feel as out raged as me just head over to http://www.petitiononline.com/DProwse1/petition.html and sign the petition.

Posted by Chris Everything at 10:54 PM