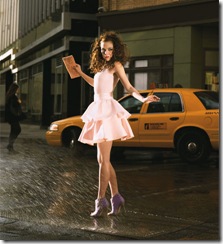 Well I guess we can put a maybe on this one.

Over the weekend, news broke that Emma Stone may be taking on the role of everyone’s favourite comic book redhead bombshell, Mary Jane. And we mean maybe. According to Cinemablend, Deadline received word that Sony due to the success of Easy A, were ready to offer the role of Mary Jane to Emma Stone in their upcoming reboot of the Spiderman franchise.

Now I know you guys know how I feel about reports like these. Personally, I do feel that in many cases they probably shouldn’t even be reported as most of the time these rumours are false. But I feel that in the case of Emma Stone it would be somewhat of a good chose for Sony to pick her up for the role of Mary Jane. Emma definitely has the looks for the role, but I have questions about her character. Mary Jane strikes me as more of a good girl character; while Emma’s played a lot of very sarcastic, almost mean girl roles. (Well at least in the films, I’ve seen her in.)

Can Emma be a good girl? Then again, I’m making the assumption that director Marc Webb will go the good girl route with Mary Jane in the Spiderman Reboot. Sam Rami’s Mary Jane was very different from the character I imagined. Given a choice today between Kirsten Dunst and Emma Stone, I would definitely go with Emma Stone for the role as I feel she better fits the Mary Jane role. Then again, I would have never imagined picking Kirsten Dunst to play Mary Jane, so even though Emma Stone may feel right for the role, I think we should all be prepared to see Sony go in a completely different direction. After all, I don’t think the current Peter Parker, Andrew Garfield, was on anyone’s radar either.

Whatever the case, we’ll all have to wait and see whether or not if Emma gets the role or not. So what are your thoughts? Who would you cast as Mary Jane?

Posted by Chris Everything at 11:19 AM