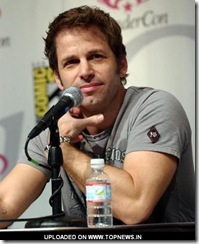 What an interesting chose.

Back when it was announced that Christopher Nolan would be a mentor on the upcoming Superman reboot there have been questions as to who would ultimately direct the project. Many of us may have simply have wanted Christopher to helm the project given his success with the Batman franchise, but we were glad none the less of Christopher’s involvement in the Superman project to insure the success of the next Superman project. What was not expected was that Warner Bros. would go with a director that himself brings a lot of box office clout.

Yesterday, it came out that Zack Snyder of 300 directing fame, will helm the upcoming Superman reboot, and I’m not really sure what to think of this one. Zack definitely has experience directing big films, from 300 to Watchmen and now Suckerpunch, Zack Snyder does bring a lot of experience, but the question is, can he direct a good Superman?

Looking at Zack’s track record, he’s been a bit up and down lately. Or should I say mostly down. Other than 300, Zack’s recent offerings haven’t been as well received among film goers. Watchmen which did well at the box office wasn’t held up highly in the mind of movie goers as 300 was, in fact I know many people who disliked the film. Legends of the Guardians: The Owls of Ga’Hoole seems to be fairing not much different, now sitting at 48% on Rotten Tomatoes.

Personally speaking I believe Zack Snyder is a great director who has had some problems, which is normal for any director. You can’t produce a good film all the time, nor can you expect everyone to like what you produce. I actually like Watchmen, but at the same time I can’t say it was my favourite film and I haven’t seen Legends of the Guardians yet so I can’t comment on the film. Bu what I can comment on is the level of imagination that I believe Zack can bring to the Superman franchise. No one can deny Zack’s level of creativity. Looking at the trailers for Suckerpunch, I wonder to myself how anyone could have come up with this concept for a film. I know I wouldn’t have imagined it, but Zack did.

I have a lot of faith in Zack to produce a very imaginative Superman film and I’m glad that they chose him. What about you?

Posted by Chris Everything at 11:40 AM