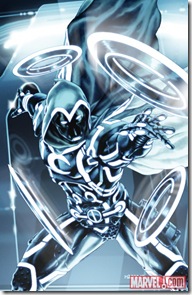 Now I have to say that I find this type of collaboration between the two companies kind of cool. Unlike what is going on between Warner Bros. and DC who apparently still don’t want to do a JLA movie, which I don’t understand. I just wonder why WB and DC never moved to collaborate on anything really even though WB has owned DC for many years. I guess DC feels like everyone will think they are copying if they come up with any kind of strategy at this point.

Whatever the case, I really think that Marvel and Disney should continue these kinds of marketing collaboration and I hope it spills over into other projects. Although one has to wonder what covers Marvel will come out with when Disney decides to do another Mickey Mouse movie.

Posted by Chris Everything at 11:28 AM