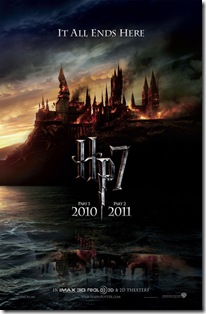 Over the weekend, Warner Bros. announced that they have killed their 3-D version of their upcoming film Harry Potter and the Deathly Hallows Part 1. This news was received with much rejoicing as many film pundits haven’t like the 3-D trend. And I don’t blame them. There have been a lot of bad 3-D conversions lately and has become pretty gimmicky.

Sure Avatar did a good job, but in the world of 3-D, the Avatar kind of films have been a bit few and far between. For every film that made good use of 3-D we’ve had maybe 5 that used poor 2-D to 3-D conversions. If 3-D was to go away, I’ll admit that I don’t think I would miss it too much, even though I do enjoy seeing a good 3-D film. That is why I’m encouraged by Warner Bros. decision to kill the 3-D version of the upcoming Harry Potter.

According to Warner Bros. statement, the decision to kill the 3-D version of Harry Potter and the Deathly Hallows Part 1 was based on the amount of time that would be required to convert the film to 3-D. Apparently, Warner Bros didn’t feel that they had the time to convert the film to 3-D before their release date and so they killed it. Unlike their previous offerings ‘The Last Airbender’ and ‘Clash of the Titans’ who many regarded to be poor 3-D conversions, it appears that Warner Bros., at least, have learned their lesson and will not attempt to rush out a half-fast 3-D conversion. This is really good news for anyone that is a 3-D fan or who likes film in general, as it appears that studios are wising up to the fact that they can’t just rush a project and hope to continue to enjoy their 3-D revenue streams.

So I applaud Warner Bros. and I hope other studios adopt this mentality. What about you? Are you glad Warner Bros. killed the 3-D version of Harry Potter and the Deathly Hallows?

Posted by Chris Everything at 12:39 PM