The Provocative Wizard of OZ 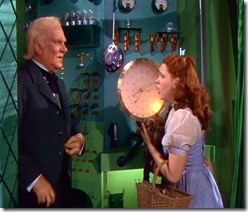 According to Pajiba, the story is as follows.

We now know for certain that Sam Raimi’s next project will be Oz the Great and Powerful, a prequel of sorts to The Wizard of Oz, and that Robert Downey, Jr., though it’s not official, is expected to take the lead. We also knew that the movie would focus on a younger wizard, and his origins in the Land of Oz. Thanks to the Hollywood Cog, we now know quite a few details about Mitchell Kapner’s story, which would have the Wizard — a snake-oil salesman posing as a magician — enter Oz via a hot-air balloon, which he uses to escape an angry husband who has found out that Oz slept with his wife. There, Oz — a fast-talking huckster who wears a velveteen frock coat (yes, I can see that) — falls in love with Glinda (the Good Witch), and the two combine forces to Fight the Evil Witches Evanora and Theodora. Theodora starts out as a good witch, but after Oz jilts her sexual advances, Evanora — the truly evil witch — convinces Theodora to become an evil witch with her and help her to rule all of Oz. Both Evanora and Theodora are described as incredibly attractive, seductive women, and Theodora likes to wear black, thigh-high boots. What is this? Oz porn?

Now considering the original film, I can’t see Disney allowing Sam Raimi to go in this direction. Let’s face it; Disney isn’t going to give up a family friendly film which can make them more money in favour of doing a provocative film. It doesn’t make a lot of sense that they would allow Sam Raimi to produce a film above the rating of PG-13, which the story above would most definitely fall above. I’m sorry, but I have to call this leak a fake. Now I could be wrong, but I just can’t see it happening.

So what do you think? Would you like to see a more mature Oz film?

Posted by Chris Everything at 8:49 AM