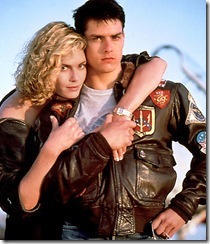 After 24 years, it appears that Top Gun is set to get a sequel. Apparently, Paramount decided to start the process off and approached the original producer and director in Jerry Bruckheimer and Tony Scott. Paramount even hired a script writer to get the script going. I have to ask why?

I think I should start by giving a bit of a confession. I never saw Top Gun. I’ve seen pieces of it over the years when it came on TV, but I haven’t seen it in its entirety. So in many ways I feel I have the same perspective on this news as many of the current film goers, as I ask why. Why after 24 years are we seeing a sequel to a film that a lot of film goers haven’t seen. Sure there have been a lot of these types of sequels; most recently Wall Street which came out in 1987. Seriously, I think there needs to be a stop to these types of sequels. I love the idea of seeing these veteran actors in films, but I know that most people could probably care less at this point. Then again, as I said before, I haven’t seen the first Top Gun. Perhaps someone who has seen the first Top Gun will have a different perspective, but I think after a certain number of years, it’s time for a remake.

Personally, I hope that Top Gun 2 is a good movie, at least for the fans of the original Top Gun. But I have to wonder how audiences will respond to this film. In any case, I guess we’ll all have to wait and see what Paramount decides to do with the sequel. What are your thoughts on this sequel? Do you think this should be a remake?

Posted by Chris Everything at 11:48 AM