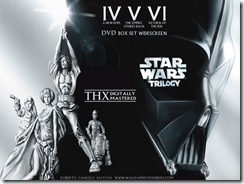 Ever since the Star Wars first released, there has been something about the Star Wars franchise that just set it apart from all the others. Perhaps it was because at the time of its release, Star Wars was very cutting edge. Sure over the years, Star Wars as a series has fallen into disarray with the arrival of the prequels, but it still as a series managed to stay at the cutting edge of film making technology.

George Lucas, it appears, not wanting to be out done has decided to convert all of the Star Wars films into 3-D. This is not the first time George Lucas has made the decision to update the Star Wars franchise. Many of you may remember the Star Wars, digital remastering of the original series of Star Wars films back in the 90s, which added in modern special effects as well as some scenes that had been cut from the original films. (Well, and the controversial editing out of David Prowse at the end of Return of the Jedi in favour of Hayden Christensen.) George Lucas has shown that he is a man that is never happy with the final product and will continually move to update the Star Wars experience into the future. Well that is assuming this release will make money, which it is guaranteed to do.

According to The Hollywood Reporter, George Lucas was persuaded to go 3-D by the Avatar experience. Avatar which is now the highest grossing film in history, partly due to its 3-D ticket sales and IMAX versions, had ground breaking 3-D technology, which would make for an amazing Star Wars experience.

Assuming that when Star Wars is converted to 3-D it comes out as well as Avatar, I think George Lucas can go running to the bank. Personally, I’m a bit worried that Star Wars may not make the jump to 3-D as gracefully as Avatar did. Avatar was shot for 3-D; while Star Wars was shot for 2-D and we have all seen what 2-D films converted to 3-D look like. For the most part, 2-D films up conversions to 3-D haven’t done so well. But what gives me hope is that George Lucas is involved.

I know that many out there have probably given up on George Lucas as a director, given his recent Star Wars directing stint, but one thing that can’t be taken away from George Lucas is his vision and understanding of film making technology. This is why George Lucas owns the best special effects house in the business in ILM. The other reason for hope is that George Lucas is allowing for time to get the 3-D conversion right. According to The Hollywood Reporter post, the conversion to 3-D will take a year to be completed. This was far longer than films like Clash of the Titans and The Last Airbender allowed for their conversion to 3-D. So I’m on the up and up on the Star Wars 3-D experience.

What about you? What do you think of the Star Wars 3-D re-release?

Posted by Chris Everything at 11:51 AM