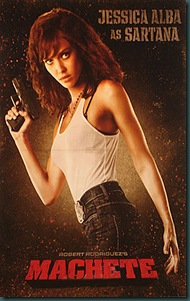 Back in 2007, Robert Rodriquez and Quentin Tarantino got to gather to release their double feature film, Grindhouse. Although it didn’t do so well at the box office many people were impressed with the Trailer for Machete. So it was no surprise when it was soon after announced that Machete would be developed into a feature film which released this past weekend. And if you are like most people, you probably didn’t notice or just didn’t care to see it.

Machete unfortunately only made $11.3 million this past weekend to come in at 3rd. My question is what happened? It seemed that a lot of people were looking forward to Machete but when it came out their interest was gone. I had one friend that commented that he felt Danny Trejo is only a side character and couldn’t hold a movie. I know that some reviewers also didn’t like it, but overall it seems the film did hold up as it holds a 71% on Rotten Tomatoes.

I have to wonder if Machete suffered from some Scott Pilgrim syndrome, where by the film failed to market itself. Whatever the case, I hope Machete can recover from this bad weekend. But I feel that it is unlikely that it will.

Posted by Chris Everything at 1:26 PM