Is Streaming the Future? 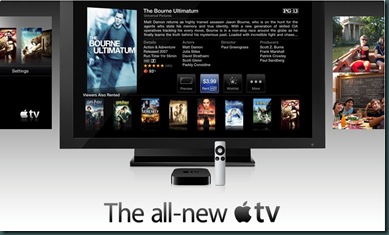 As many of you already know, Apple TV received a bit of an upgrade last week at the Apple event. The new Apple TV comes featuring an upgraded UI and no storage. Including no storage into this device is a pretty bold move on the part of Apple. People are use to the idea of owning their own content, but it appears Apple is attempting to sell people on the idea of simply renting it.

Sure Apple is not the first to do that, Netflix and other online services have been running streaming services for some time now. But what makes Apples approach different is that they don’t have a subscription model. Certainly the Apple TV can stream Netflix or YouTube, etc., it’s just that Apple themselves have not come up with a subscription model and I have to wonder why. Perhaps Apple isn’t really interested in the content. After all Apple is hardware company and perhaps their interests are in selling the Apple TV itself. Which is kind of what they’ve done with iTunes, were most of the money goes to content creators.

That being said, one disappointing feature of the Apple TV is its streaming. Apparently, Apple TV will only stream in 720p. Which is good for most people, and is really not too surprising since I have found that streaming, although its improved over the years, still isn’t as close to what you can get if you have the content locally on the device your playing from. This is why I’m a little disappointed that there is no storage on this device. Apple TV in my opinion has taken a step back, as it seems Apple left out the storage to please content creators that wouldn’t mind you renting their content.

Whatever the case, having no local storage and having streaming options do solve one problem. In my opinion, in that most people don’t want to own everything they watch. I have a friend that has “acquired” a lot of movies over the years and so he ended up with boxes and boxes of DVDs, which became a mess to deal with and now that Blu-Rays have come out there is problem as to what to do with all of those DVDs. Not owning the content solves that problem, just as long as the streaming service comes at a decent price.

With Apple’s rental service, not owning your content could get really expensive fast. So I’m hoping Apple come up with their own subscription service soon, since other players can stream Netfilx and Youtube too and they also come with built-in storage. Even the Playstation 3, Wii and Xbox 360 can stream Netflix, so I’m not sure why anyone that owns these devices would want an Apple TV. Then again, maybe that’s just me.

What do you think? Are you buying an Apple TV?

Posted by Chris Everything at 9:59 AM