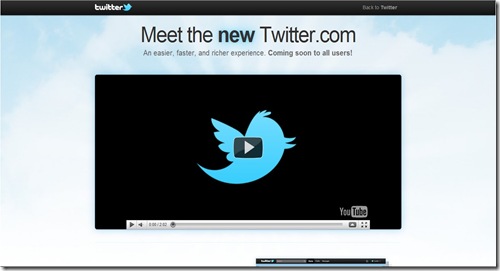 One has to wonder if it’s a bit too late.

Chances are if your reading this your probably already a twitter user. But for those that aren’t familiar with Twitter, Twitter is essentially a social networking site were users share everything from what they are thinking to what they are doing at the moment, all in 140 characters. The 140 characters limit by the way first started with the notion that users would be updating their feeds via text messages from their cell phones which had a limit of 140 characters per text message.

Since the launch of Twitter back in July of 2006, Twitter always seemed to embrace the idea of being simple and easy to use, and thus resisted the impulse to add new features. In many cases, Twitter has simply been a backbone for third party applications. Because of this, many people access Twitter via their cell phones. I know that I mostly see Twitter via my Blackberry. If I wasn’t blogging I don’t think I would ever go to the website via my computer, but I know that there are a lot of people that still do, so perhaps it’s a good idea for Twitter to start to do something to keep people coming to their main page.

The new Twitter is coming pretty loaded. Some of the new features are the ability to embed pictures and video in your feed, as well as, a customizable side bar that you can create for your followers, mini profiles so you can click on a user and see his profile, and an ability to find related content by clicking on an author or story.

Personally, I’m excited by Twitters new emphasis on their main page since I always wonder how these guys ever plan on making money. When I log into Twitter I don’t see ads of any kind. Sure they have those sponsored tweets, but I don’t see them too often. And so my question over the years, as the site literally started falling over because of its mass amount of users, how will these guys ever make money. The New Twitter looks like it could possibly answer that question. Well at least I hope it does. So what do you guys think of the new Twitter?

*** By the way, those interested in seeing Twitters new ad just view the video below.

Posted by Chris Everything at 11:21 AM