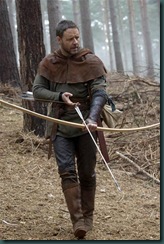 I wondered what happened with this film.

Last year as Robin Hood was announced, I felt very optimistic.  I was a bit worried that Robin Hood would have a hard time overcoming the shadow of the Kevin Costner version, Robin Hood: Prince of Thieves.  But as the months went on I wondered why this film wasn’t getting more press, and why the promotion end of this film was all but quite.

Now a few days before the release of Robin Hood, I still can’t remember seeing a single commercial for this film run this week.  You would think a film with an award winning director in Ridley Scott, and with an Oscar winning actor and actress in Russell Crowe and Cate Blanchett would at least warrant a few commercials.  Well that was until I checked Robin Hood’s rating this morning on Rotten Tomatoes.

To my great surprise, Robin Hood was sitting at 51% on Rotten Tomatoes and continues to move downwards, as it now sits at 44% (as of the writing of this post) on 63 reviews. This is kind of disappointing as I like Ridley Scott as a director and I was looking forward to see this film.

Well, I guess I could rent it.

Posted by Chris Everything at 12:49 PM