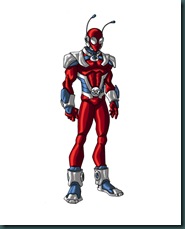 I’m not sure if this is just a rumour or if it’s actually happening, but there are now reports that Nathan Fillion may be playing Ant Man.  This wouldn’t come as a huge shock given the fact that Joss Whedon is now attached as the director of the upcoming Avenger films and Joss is very famous for working with the same group of actors for all of his projects.

The speculation had been rampant for weeks as to who would be showing up in The Avengers from Joss’s roster of actors.  So if Nathan Fillion is really as close as some of the reports online are saying to playing the Ant Man, it won’t be a huge surprise.  The only question is who will play the other members of the Avengers team.

Then again, maybe this is just a rumour coming back around the net again. When it was announced that Joss Whedon would be directing the forth coming Avengers film, Rodney over on The Movie Blog speculated at just who would be filling the roles on The Avengers film. In Rodney’s predictions, he placed Nathan Fillion as playing the Ant Man. Nice coincidence or is this just his prediction echoing back from the web. It will be interesting to see just if Rodney was right and whether he will be right on his other predictions.

Whatever the case, I guess we’ll just have to wait and see.

Posted by Chris Everything at 12:01 PM