Prince of Persia Comes Up Rotten 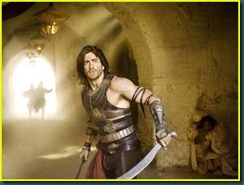 There is an old adage that says all videogame movies suck and unfortunately it appears that Prince of Persia may be fitting the mould. I decided to take a swing by Rotten Tomatoes today and to my surprise, (ok it wasn’t too surprising) Prince of Persia is currently sitting at 44% on 88 reviews and its sliding downwards.

In many ways, I’m disappointed that Prince of Persia, since no video game movie has ever really been great. Sure I did enjoy the first Street Fighter since I can laugh at its cheesiness and the first Mortal Kombat was alright. But other than that, all of the films have been mediocre or unwatchable in some cases. I think the Resident Evil franchise has fared the best, but even it isn’t exactly hitting it out of the park.

I’m just waiting for the day that a great film is made off of a video game franchise. After all, many of the popular videogames actually have a great concept which could be the basis of a good story.

Posted by Chris Everything at 9:57 PM