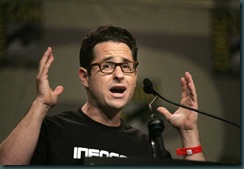 Just too bad it’s not much of a secret anymore.

Anyone going out to see Iron Man today should pay some extra attention to the trailers that you see before the film starts, or you just might miss something. JJ Abrams is set to debut the trailer for his “secret project” ahead of Iron Man today, the only problem is that JJ’s project isn’t so secret anymore.

Instead of just letting everyone get surprised by JJ’s secret project some diligent bloggers have gone out and exposed JJ’s secret online for all to see. Anyone that hates surprises can just head over to The Movie Blog where they have decided to repost the details of this new trailer. I won’t do that here since I like to be surprised and I don’t want to accidentally read it and ruin the surprise. What I do know is that the new project is called Super 8 and is collaboration between JJ Abrams and Steven Spielberg. Also, for anyone wondering, Super 8 is not a Cloverfield prequel as some have speculated.

In any case, go out and enjoy Iron Man this weekend. I’m not sure if I’ll get a chance this weekend to see it, but I’m definitely seeing.

By the way, if you’re going to see Iron Man tonight, make sure you stay to the end of the credits as there is a scene after the credits.

Posted by Chris Everything at 9:58 AM