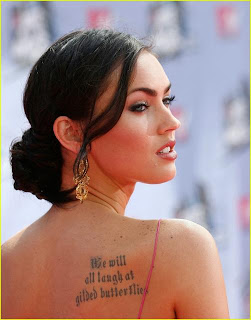 By Michael Bay that is.

It hasn’t been a huge secret on the web that Michael Bay and Megan Fox haven’t had a great relationship. Last year after the release of Transformers 2: Rise of the Fallen, Megan Fox was openly critical of Michael Bay in the media over the poor reviews of the film. Although Michael Bay really didn’t get into it with Megan, he couldn’t help but publish a letter written by some of his film crew concerning Megan’s behaviour on set.

Now with filming for Transformers 3 in full swing there are reports that Michael Bay has opted to not have Megan Fox back. According to the report done by Deadline (which I saw over on IGN), Michael Bay has decided not to have Megan Fox back for Transformers 3 and the script will be re-written to include a new love interest for Sam Witwicky (Shia LaBeouf).

Now I’m sure that someone out there will be greatly disappointed to see Megan Fox gone from the next Transformers, but I can’t say I’ll miss her. Sure she is attractive, but really I think the human component of each of the previous Transformer films has been their weakness. Well, other than the relationship and humour between Sam and his family.

I really don’t like saying it, but maybe Megan leaving will be a good thing for the Transformers franchise. After all, if she was really such a pain to deal with, maybe the crew will work better without her. So what do you think?

***Update: I'm not sure if this is just Megan's pride, but apparently Megan Fox is now claiming that it was her decision to leave Transformers 3.   (saw this over on the Latino Review).
Posted by Chris Everything at 8:51 PM