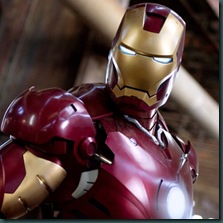 One has to wonder.

Many of you may know from some of my previous posts that I was a huge fan of the first Iron Man movie. Iron Man was an amazing film and now with the upcoming release of its sequel, many are asking what records it could break, as there is a feeling that the Dark Knights opening day record of $158.4 million could be in Iron Man 2’s sights.

In recent surveys, The Los Angeles times are reporting that the interest in Iron Man 2 amongst both women and men is quite high. So the question is, Could Iron Man 2 really beat the Dark Knight? I think it could. I don’t know anyone that doesn’t want to see Iron Man 2, as It has been universally accepted that the first Iron Man film was great and the expectation is that the second one could be just as good as the first, if not better.

So what do you think? Are you going to see Iron Man 2 opening weekend?

Posted by Chris Everything at 11:35 AM