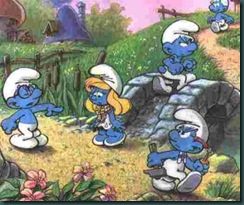 Someone must have gotten drunk again.

It appears to all be true. We are now going to get a live action Smurf movie and its in 3-D. Make no mistake, I use to love watching the Smurfs as a kid, but I have no desire to see a live action version of my favourite Smurfs, even if it is in 3-D. And it appears that I am not alone on that one.

Over on AMC’s Script to Screen blog, they have decided to post Columbia Picture’s press release, to prove that the film isn’t just a joke, as everyone online just didn’t believe what they were reading. And I don’t blame them. A live action Smurf movie seems like a really dumb idea. I could go for an animated film, but live action is going to look a little goofy. Then again, maybe that’s just my opinion.

So what do you think? Are you lining up to see the Smurfs?

Posted by Chris Everything at 8:53 AM