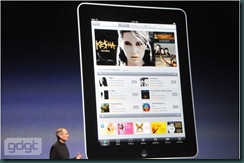 Ever since the iPad was first announced back in January I haven’t been a huge fan of the the device. At first I thought it might be cool as an ultra portable computer, but I then realized that many of the net book offerings already out there would be more ideal for me. I also questioned whether or not the iPad would actually sell.

Well I guess I was wrong. The iPad has sold very well, draying lines larger than those when the iPod released, which could mean that the iPad will be a big success for Apple. But is it any good.

This morning I got around to reading the one review that I could find for the iPad, that being Engadget’s review. Although Engadget seems to be fairly positive about the iPad its very clear from the review that the reviewer has been in the iPhone, iPod Touch ecosystem, (something that I’ve avoided). Having avoided buying an iPhone and an iPod Touch I have to wonder how the iPad would relate to people like myself who have not used either of these devices.

Also, the fact that they are using a tweaked iPhone OS, seems to be causing some problems for the iPad. One thing that has been mentioned was the lack of multi-tasking, which on a computer or computer like device is a must, and the iPad lacks multi-tasking. Also, the way that the device handles notifications isn’t great, as it will send you popups which freezes the application that you are working in every time someone sends you a message, which is a huge annoyance for anyone to anyone using the device.

Whether or not the iPad will cause eye strain or not when reading books or newspapers has not been answered yet. I expect to get an answer to that question in the weeks to come.

For anyone interested in reading the full review you should head over to Engadget (or click here).

So what do you think? Do you have an iPad?

Posted by Chris Everything at 12:50 PM