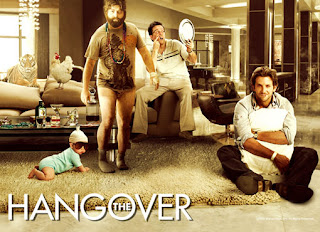 I loved The Hangover. The Hangover is the funniest film I‘ve seen in a long time, which was surprising given that, going into the film I never thought it would be as great a film as it was. And I guess I wasn't the only one that felt that way. That is why it wasn't really that surprising when Warner Bros decided to announce that there would be a sequel to The Hangover. The only problem is, the story from The Hangover kind of ended in the first film.

But having made over $277 million domestically, I guess Warner Brothers felt a sequel was in order, regardless if a sequel would or wouldn't work. And I don't blame them. With a production budget of only $35 million, The Hangover was a very profitable film for Warner brothers, not that the next film will end up being made so cheaply, as Warner Brothers didn’t sign the actors to a multi-film deal before the first film.

Whatever the case, I'm glad to see a sequel to The Hangover and I just hope that they can be as witty with the sequel as they were with the original film. Either that or they should just consider not releasing a sequel so as not to ruin the franchise.

VIA
Posted by Chris Everything at 8:47 AM