Gizmodo is reporting that it appears Apple has filed for a number of patents for applications that seem oddly similar to Third Party Apps they already carry in their App store. 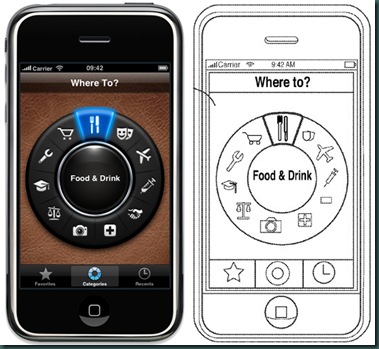 Above you will see a picture of a side by side of the “Where to” App from Apples app store, with a picture from their patent filling. Looking at this with the naked eye it seems that they are pretty much the same application, so one has to wonder why Apple would try to patent an already existing application made by a third party? Is it simply a case where too people thought up the same idea around the same time? Sadly, it doesn’t seem to be the case that Apple slipped up.

In an update to the article, Gizmodo referenced a TechCrunch article in which they found that Apple had done a similar thing for another App called “Guide You Amsterdam”. Hopefully this is all some huge misunderstanding by some tech journalists, but personally this does look a little suspicious.

So what do you think?

Posted by Chris Everything at 11:15 AM