Christoph Waltz is a Lizard 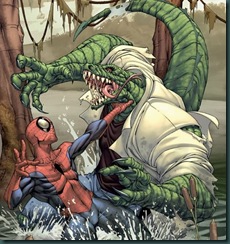 Well that is if the rumours are true.

As many of you already know, Spiderman under the helm of Sam Raimi was cancelled earlier this year, and the decision was made at that point to recast and start the Spiderman series over again. If the rumours are true Dylan Baker has been a casualty of this great fall out. You may remember that Dylan Baker played Curt Connor, Lizard’s alter-ego in the 3 previous Spiderman films. And there was speculation before Raimi’s departure, that he would in the fourth film finally become the Lizard.

But alas, according to the new rumours Christoph Waltz is now in talks to play Curt Connors. Which by the way, I don’t really mind? I think Christoph Waltz is an amazing actor and he would definitely be a great addition to the Spiderman franchise. It just sucks for Dylan that he won’t get a chance to play the Lizard. But I guess that’s just Hollywood.

Whatever the case, we’ll just have to wait and see if the rumours are true. After all, 9 times out of 10 these casting rumours turn up empty. Let’s just hope they are true this time.

Posted by Chris Everything at 10:08 AM