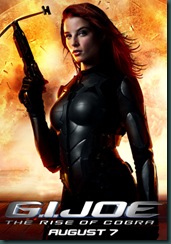 It now been a week since GIJOE released to theatres in North America and I felt that it was time to finally do an honest discussion of this movie.  I know that most people try to have there reviews earlier, especially as it helps people when they are going to see the film make a decision as to whether or not they will actually see it.  But I felt that I should wait and let people see the film to see how many people feel the same way I do.

GIJOE for me was just ok.  I have seen it twice now since it released so I feel that I have a good grasp on what I liked and disliked about this movie.  For me this film was entertaining enough to watch twice and not feel bored, but it never really excited me.

I went into this film feeling that it wasn’t going to be good given the fact that they hid the film from the critics and none the of trailers really looked all that good. It wasn’t as bad as I thought it might be, but it wasn’t that good either.  The  action scenes where pretty good.  (I felt that the car chase scene through Paris was probably the best scene of the movie. )   I liked the few jokes that they gave Marlon Wayans (Ripcord).  Seeing  Sienna Miller and Rachel Nichols in tight leather was good.  The Snake Eyes and Stormshadow scenes were good.

The things that were bad though I think slightly out numbered the good.  The dialogue was bad in this movie, especially the scene where Scarlet is in the washroom with Ripcord and she is complaining about how she wasn’t perfect, as she got beat by the Baroness. (It was just a bad scene.)

There was also some useless scenes and characters.  The Baroness’s husband was useless. (They didn’t need him.)  The scene with Scarlett complaining in the washroom was unnecessary.  A bunch of the flash backs where pretty useless. ( I know some will disagree, but If you edited out the flashbacks you probably won’t even notice they were gone.)

By now, some of you are probably feeling that I’m being pretty hard on this film and probably I am.  Its very easy to criticise a film if you don’t feel its good.  Its just (and I’ll be honest) I grew up with GIJOE, it wasn’t my favourite show, but I still wanted better for it.  And I didn’t get. The movie was cheesy, which isn’t a bad thing.  I have in the past liked cheesy movies like “Snakes on a Plane” and “Street Fighter” (the Jean Claude Van Damme one).  I think where this film lost me was that it made 2 big errors that took me out of the film.  I think if they changed these 2 things the film would have been better for me.

The first thing that took me out of the film was the bad costumes choices.  I liked the costumes in general, but I hated hated the lips on Snake Eye’s costume.  I think they should have just kept it flat.  Also, they gave Heavy Duty a costume that greatly resembles Blades costume.  Heavy Duty looked so much like Blade that when I saw him in the ship after they leave The Pit for the first time with Ripcord and Duke and Snake Eyes was behind him with this sword out I turned to my friend and said “Blade?”   It took me completely out of the movie.  Then later at Cobra’s Base in the Arctic,  the personal are wearing costumes that look like Starfleet uniforms from Star Trek.  It took me out of the film again.

The second and final thing that just ruined the film for me was the bad effects.  The computer graphics in this film looked dated.  If this film was made it the earlier 90s they may have past, but not today.  The end scene was probably the worst scene for this.  As I watched the submarine battle I thought I was looking at toys fighting in the water.  It was just bad.  They just lost me, which isn’t good at the end of your film.

If they just changed the the bad costumes and effects, I think I would have enjoyed the movie a ton more.  That said they are now making a sequel which I will probably end up seeing since its GIJOE.  But I seriously hope they make some changes to the film.  I want to be able to like the movie.

In any case, I would like to hear your thoughts on this.  Am I being too hard on this movie.

Posted by Chris Everything at 12:27 PM