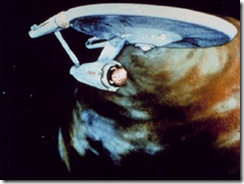 Today, Star Trek is celebrating its 42nd birthday. It was on this date in 1966 that Star Trek (The Original Series) first aired on NBC in the United States. Since then it has birthed many spin offs and is now the second longest running Science Fiction series.

For anyone that want a complete list of series, The Movie Blog as a nice post that you can find here.   So happy birthday Star Trek  and I really do hope that it can come back.  I still to this day watch re-runs of many of the spin off series.   (I must confess that I don't watch the Original series regularly.)  Hopefully, the new Star Trek film can breath new life into the franchise.

Posted by Chris Everything at 11:58 AM