So its Riddler and Penguin 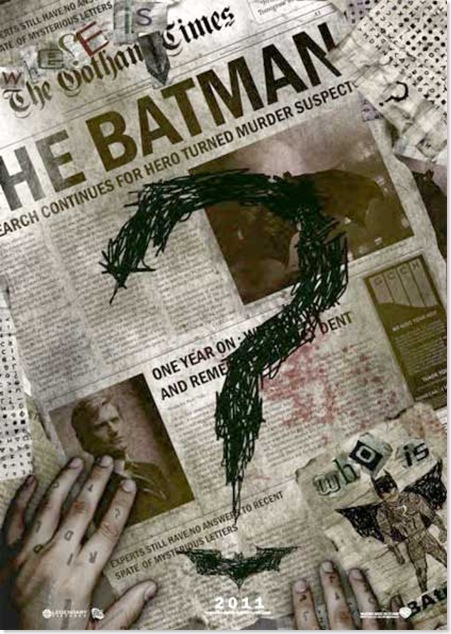 Well at lest that is according to Michael Caine. In a blog post on MTV.com, Casey Seijas (a blogger for MTV)  commented on a recent interview they had with Michael Caine at the Toronto International Film Festival in which Michael Caine appears to confirm that they are looking at the Penguin and the Riddler to be the villains in the next Batman Film.  Also, according to the Post they are looking at Johnny Depp to play the Riddler and Philip Seymour Hoffman to play the Penguin.

Now, if this news is in fact true I would be pretty happy, as well as, many fans that have been making posters for the next film featuring The Riddler as one of the next villains for weeks.  And, being a fan of Johnny Depp's work I don't think there would be a better choice to play the Riddler (then again, I could be wrong).  But that being said, I would like to tend not to believe this post since I feel that Michael Caine was being sarcastic.

If you read to about the second paragraph of the post he says, “It’s Johnny Depp as The Riddler. And The Penguin is Philip Seymour Hoffman. I read it in the paper.”   Then, Michael Caine goes into this story were he is talking to an Warner Bros. executive that confirms this information.  So if he was in fact being honest I don't really feel that you can really tell from this interview.  So before we all get excited I feel we should all just wait on confirmation from the Studio, whether or not this news is legit information.

Posted by Chris Everything at 8:54 AM