Beware of the Joker 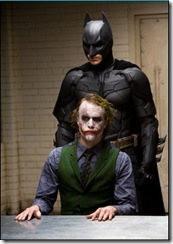 While many of us have been enjoying the new Batman movie over the last several weeks, some may have been wondering if this story is in fact real.  (Well no you probably weren't, since we know these characters are from comic books, right.)  Well that was until now.  WNDU (one of NBC's stations) is reporting that 20 year old Spencer Taylor dressed up as the Joker and tried to rob a Theatre in Three Rivers, Indiana Sunday night.

When police arrived at the theatre they found the that the theatre staff had managed to restrain Spencer.  Whether this heist was connected to an attempt to raise havoc in the Three Rivers area no one is certain.  Also, there was no mention of Batman's involvement in the arrest.

Posted by Chris Everything at 2:54 PM