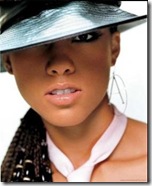 At lest it looks that way.  In an article by msnbc , which sights a Blender magazine interview, Alicia Keys talks about how she is now wearing a Pendant of an AK-47 and has read several autobiographies of several Black Panther leaders.

Also in the article, she has a theory that the feud between Biggie and Tupac was in fact started by the media and the government to keep a new black leader from rising up.  Which doesn't make sense in light of Obama's rise.  Why didn't they go after him? But anyways, I really don't know what is going on with her, since even her mother is worried about her.

I  hope this phase that Alicia is going through goes away, since I really respect her and her music.  I would hate for her to tarnish her career by getting into politics.  Then again, politics made some bands famous.  So I guess we will have to wait and see what happens.